On Saturday, April 9 at 8:29 a.m. ET, Dragon autonomously docked with the International Space Station. Falcon 9 launched the spacecraft to orbit from historic Launch Complex 39A (LC-39A) at NASA’s Kennedy Space Center in Florida on Friday, April 8 at 11:17 a.m. ET.

The first-ever all-civilian crew to launch to the International Space Station blasted into orbit today, with three businessmen each paying $55 million (£41 million) for the privilege.

After an eight-day stay, Dragon and the Ax-1 astronauts will return to Earth with a targeted splashdown off the coast of Florida.

Axiom Space’s Ax-1 mission is the first all-private human spaceflight mission to the International Space Station. The Ax-1 crew will participate in educational outreach and conduct innovative research experiments while in the orbiting laboratory.

With the picture-perfect liftoff, the crew officially began a 10-day journey that will include eight days aboard the International Space Station. Ax-1’s SpaceX Dragon capsule is set to dock with the orbiting lab around 7:45 a.m. EDT (1145 GMT) tomorrow (April 9).

Ax-1 marked the fifth flight for this Falcon 9’s first stage. And the booster made its fifth landing as well, coming down for a pinpoint touchdown 9.5 minutes after liftoff on the SpaceX droneship A Shortfall of Gravitas, which was stationed in the Atlantic Ocean. 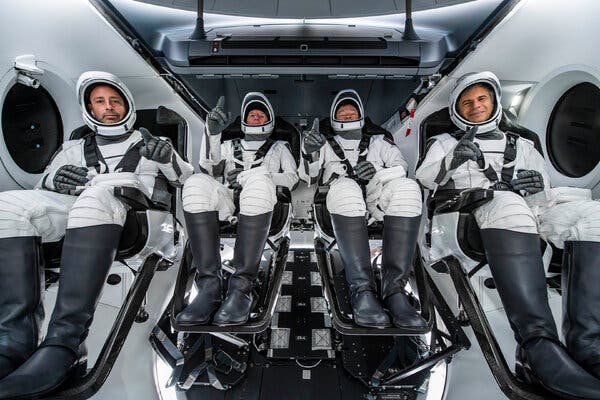 On its flight to the International Space Station, Dragon executed a series of burns that positioned the vehicle progressively closer to the station before it performed final docking manoeuvres, followed by pressurization of the vestibule, hatch opening, and crew ingress.

The mission is the first to go to the space station on which all of the passengers are private citizens, and it is the first time that NASA has collaborated in arranging a space tourism visit. The flight marked a pivotal mo

Although the Kennedy Space Center is part of NASA, NASA had almost no role in the launch or the orbital ride. The agency’s officials were happy about that as they look to a future when they can simply buy services like room aboard a space station from commercial vendors.

August 10, 2021
The International Monetary Fund, (IMF) and the World Health Organisation, (WHO) have rated Zimbabwe among the best countries in the world when it comes...

May 11, 2022
Zambian President Hakainde Hichilema has concluded his four days engagements in Cape Town, where he also attended 2022 Investing in African Mining Indaba. While at...

November 11, 2019
Harare - As inflationary pressures turn Zimbabwe into a consumptive market, local miners have requested Government to allow for the full retention of their foreign currency...

July 27, 2022
Zimbabwe will start receiving 100MW from state-owned utility Zesco early next month under a five-year agreement, while a delegation from Mozambique met this Monday,...

August 19, 2019
HARARE - Falcon Gold Zimbabwe Limited’s loss widened to US$4,8 million in the year ended September 30, 2018 due to reduced mineral production caused by...