JOHANNESBURG – Sierra Leone President Julius Maada Wonie Bio will attend the 2020 iteration of the Investing in African Mining Indaba, which takes place in Cape Town from February 3 to 6.

Bio was elected as the fifth President of Sierra Leone in May 2018 and is popularly referred to as the “Father of Democracy” because of his contribution towards the restoration of democracy and attainment of peace in the country.

Sierra Leone – which has large reserves of diamonds, iron-ore, rutile and bauxite, as well as small-scale artisanal mining of gold and diamonds – has one of the largest rutile reserves in the world, according to a statement by the Indaba organisers on Monday.

While mining contributes about 20 percent to the country’s national gross domestic product (GDP), it is said to account for about three-quarters of the country’s exports.

As part of its drive to attract investment, Sierra Leone will be exhibiting at Mining Indaba, with its delegation including Mineral Resources Minister Foday Rado Yokie, who will be presenting a country case study titled ‘The new direction for Sierra Leone’s mining sector”.

He will report on the recently completed airborne geophysical survey and the progress that the country has made in formalising the artisanal mining sector, which has not only benefitted local communities, and women in particular, with a source of income, but also the economy as a whole.

Yokie will also be participating in the West Africa panel discussion as part of the Intergovernmental Summit at the Mining Indaba.

Bio’s vision for the future of Sierra Leone is underpinned by his belief that the key to economic development lies in the investment in human capital – 20 percent of the country’s national budget supports free, quality education, and women admitted to university to study science, technology, engineering and mathematics receive a full scholarship.

“We will have a healthier, better educated and highly skilled young population fit for the twenty-first-century global economy, and that will lead and drive the country’s national development. They will be well-equipped to deploy science, technology and innovation, which, in turn, will attract investment,” he states.

Mining Indaba content head Tom Quinn, meanwhile, notes that the theme for Investing in African Mining Indaba 2020 is “Optimising growth and investment in the digitised mining economy”, adding that Bio is “the new generation African leader recognising that innovation and technology with drive mining investment on the continent”.

The Indaba’s Ministerial and Government programme is set to attract about 38 Ministers from across the African continent and beyond.

Following the success of its twenty-fifth anniversary, Mining Indaba 2020 is gearing up to attract even more junior, midtier and major mining companies and even more investors with the aim of facilitating deal-making and investment opportunities.

The event in 2020 will also bring industry-leading content including on resource nationalism and innovations in technology, the brand-new General Counsel Forum, Mining 2050, the Intergovernmental Summit, Battery Metals Day and the return of the popular Investment Battlefield – Mining Weekly

Zimbabwe on a US$12 Billion Mining Target 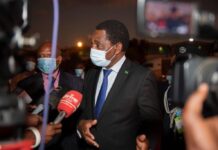 Govt approves the total ban of export of chrome concentrates

Capacity utilisation for Zimbabwe mines seen at 80% in 2021

Elon Musk Sells 7 Billion Worth of Stock Amid Twitter Battle

April 17, 2022
CHAIRMAN’S STATEMENT INTRODUCTION For the greater part of 2021, there was a growing sense of cautious optimism that finally the worst of the COVID-19 pandemic was...

June 10, 2022
During a recent visit to South Korea, President Joe Biden and a team of US officials established a new annual forum to broaden cooperation...

March 14, 2019
HARARE - Zimbabwe’s police and an antigraft unit called the Zimbabwe Anti-Corruption Commission (ZACC) are combing through an audit to nail looters after an investigation exposed...